A closer look at everything related to SQL Server

Brief Recap of the session:

This technical briefing’s main objective was to demonstrate the latest and greatest features of SQL Server 2016 and how running it on SanDisk hardware multiplies the benefits of new features.

This demo was conducted in Microsoft Technology Center in Chicago and was jointly presented by Microsoft and SanDisk representatives. It was a 300-level advanced preview of the hardware and software without any sales pitch.

Their Fusion IoMemory card goes directly in the PCI slot on the server’s motherboard and they have parity NAND chips on that card for fault tolerance. Price went down considerably for the same product since the April 2015 for two reasons. First their Shanghai, Chaina NAND chip manufacture has become more efficient in producing high quality chips and secondly partnership with Microsoft and other hardware vendors such as Dell and HP.

These are some of the numbers we get with SanDisk flash when tables are stored as normal (i.e; on Sandisk without using columnstore feature of SQL Server).

SQL server 2016 has opened the clogged artery meaning flash drive performance is out of the charts. They were talking in terms of IOPS, throughput and latency. Now SQL server 2016 (compared to sql server 2014) using Sandisk or any flash drive can deliver IOPS in millions, Throughput in GBs and latencies in microseconds. The enhancement is due to the improved ColumnStore feature in SQL Server 2016. IO bottleneck for OLTP or OLAP load almost vanishes. 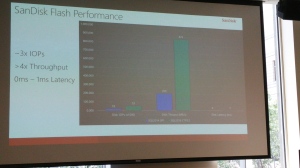 Another benefit is cost savings in SQL server license. Because most of the time sql load is IO bound and CPU hardly goes above 25% on average. These flash drives will make CPU work for what they are worth. So only 2 CPUs are needed for server load as big as 10 TB Datawarehouse.

Since our databases are not even 1 TB, the whole critical databases in production can be stored on these flash drives. Or we can have our log files and tempdb files on flash drives. There are lot of options. And when these cards are purchased with VM vendors, there is warranty included which replaces these cards when it fails without cost to us.

They also have caching feature, I think this a separate software based product that needed to be purchased separately and maybe useful for application level processes to run faster.

Additionally, these will also make our HA and DR very reliable in terms of failover.

In my opinion, we can take advantage of flash drives for production load in our VMs when we upgrade SQL Server to 2016.

All we want to do is sail rather than fail